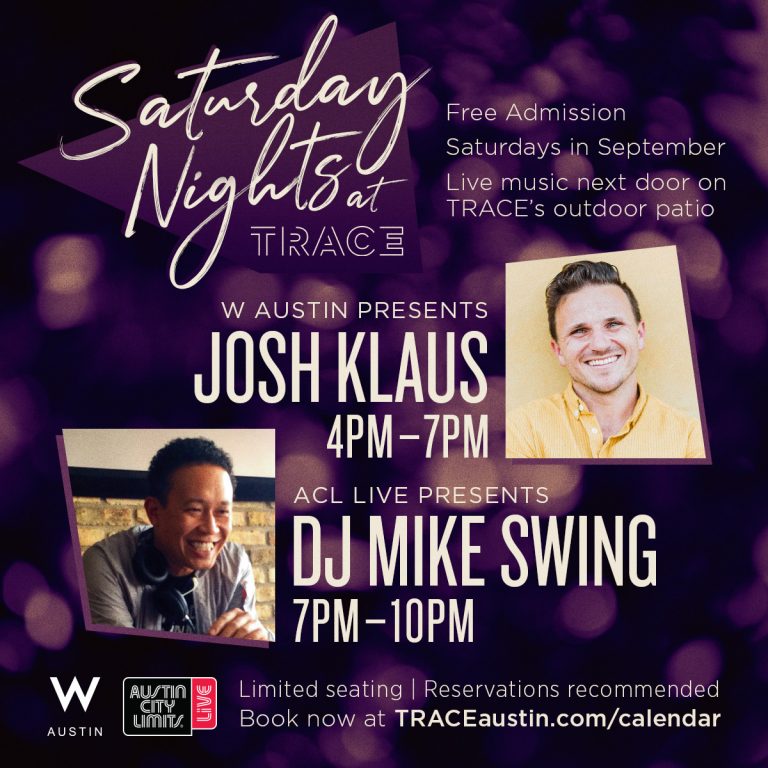 Spend your Saturday night next door at TRACE with FREE live music on the patio, every Saturday in September! Start the evening with singer-songwriter Josh Klaus (4p-7p) and then the party continues with DJ Mike Swing (7p-10p). Seating is limited to ensure a safe environment, so reserve your table in advance here: http://www.traceaustin.com/calendar

Josh Klaus can be summed in two words: Passionate and professional.  Josh is the owner and founder of Josh Klaus Music and has been playing music for over 18 years.  Based in Austin, Texas, Josh has been covering just about every type of popular song — brand new, super old, fast, slow, male, female, pop, rock, R&B, soul, country, etc.  If there is a song out there that moves him or moves you, he will learn it, love it, and play it.

DJ Mike Swing has emerged as one of Austin’s most significant DJs. He performs weekly at some of the most respected venues in the Capital City from the upscale Rio Rooftop Lounge in downtown Austin, The Park in The Domain to the new Brew Exchange on West 6th Street. His resume spans more than a hundred events, including The 2012 Austin Redbull 3style Competition, Nike Human Race, The Austin Maxim Magazine party and opening-touring DJ for Usher, The Clipse and The Alkaholiks. Sought after for his open format style of music, his Djing style includes every genre of music from 80′s to Hip Hop, House, Electro, pop, alternative and rock.