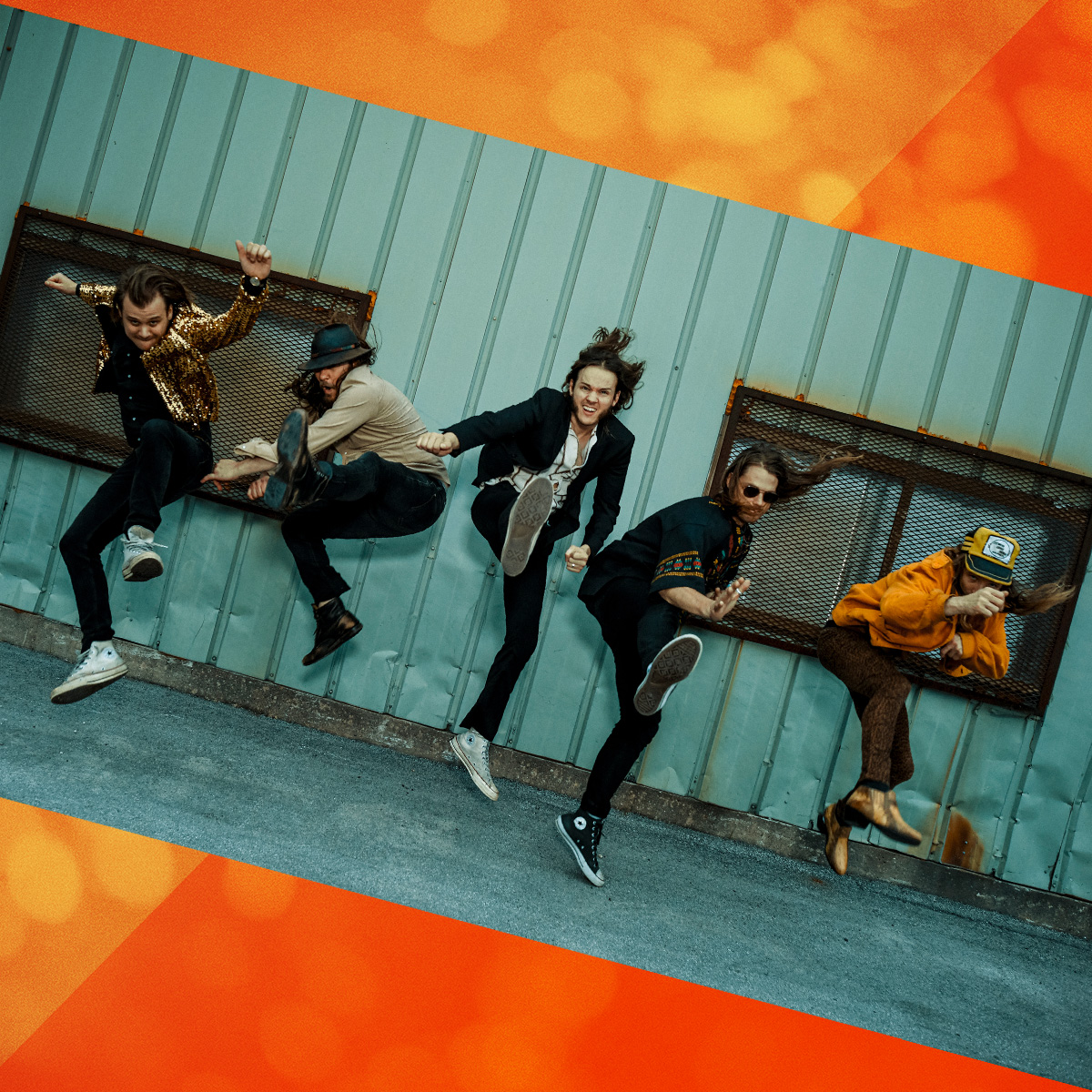 Make a night of it! Book a hotel stay just steps away at W Austin. Exclusive rates for ACL Live patrons start at just $219 when you book with your tickets here. Already got your seats? You can still add a room starting at $259

ABOUT THE TEXAS GENTLEMEN

Pop on Floor It!!!, the new and second full-length effort from the Texas Gentlemen, and prepare your eardrums to be hit with everything from woozy, brass-fueled Dixieland-style jazz (“Veal Cutlass”), to slinky, chicken-scratch country funk (“Bare Maximum”) to lushly orchestrated pop-soul balladry (“Ain’t Nothin’ New”)—and that’s all in just the first 10 minutes of play time.

As for how the Texas quintet manages to slide so seamlessly between various styles and sounds? Well, these are no ordinary Gents. Rather, the members—co-singers and frontmen Nik Lee and Daniel Creamer (who also handle guitar and keys, respectively); guitarist Ryan Ake; bassist Scott Edgar Lee, Jr.; and drummer Aaron Haynes (who since the recording has been replaced by Paul Grass)—have spent the last half-decade or so logging thousands of hours of stage and studio time behind a wide array of artists, from legends including Kris Kristofferson, George Strait and Joe Ely to young whippersnappers like Leon Bridges and Shakey Graves.

And while some people (okay, many people) have whispered in one another’s ears and written kind words about how this crack outfit of stage and studio aces is nothing less than the second coming of celebrated backing units like the Wrecking Crew, the Swampers and one-time Bob Dylan associates the Band, you certainly didn’t hear it from the Gents themselves. “We never instigated or condoned any of that,” Nik Lee says, and then lets out a self-effacing laugh. “We definitely appreciate the comparisons…we just don’t think they’re accurate.”

And anyway, no matter how many artists they’ve played with onstage or in the studio—and trust us, there’s a whole lot of ‘em—they are, first and foremost, their own (gentle)men. “We’re a group of five, and when you hear us play you’re hearing the influence of five different musicians working together as one unit,” Daniel Creamer says. “Everyone has the freedom to suss out their parts and do the thing that fulfills their creative spirit, but at the same time there’s trust in one another to always be serving the song.”

And what songs they are. Floor It!!! follows the Texas Gentlemen’s 2018 debut, TX Jelly; but where that first record, cut in four days start to finish at Muscle Shoals’ iconic FAME Studios, was very much a snapshot of a quick moment in time, the new effort is a decidedly more composed and crafted affair. “The vibe of the first one was, ‘Let’s just do this thing!’ ” Creamer says. “But this time it was like, ‘We have this idea about what we want to accomplish…’ ”

What they did accomplish is, to put it mildly, pretty impressive. While the Gentlemen’s sound is clearly steeped in the classic roots, rock and pop music of the ‘60s and ‘70s, there’s a dreamy (the lilting “Sing Me to Sleep”), spacey (“Skyway Streetcar”) and occasionally progressive (the groovy instrumental journey “Dark at the End of the Tunnel”) element to what they do that seems to detach the music from belonging to any particular place and time. Add in elements of funk, soul, country, r&b, southern rock, gospel (“just about all of us played in churches early on,” Lee affirms) and essentially any other style that catches their musically omnivorous ears; an expansive and detailed approach to arrangement that sees the songs adorned with all manner of horns, strings and heavenly background vocals (cue up the positively gorgeous “Hard Road” for an almost religious experience); and a healthy dose of wit (there’s that song title, “Veal Cutlass,” again) and weirdness (the little lady on a jet, seated next to a military vet, who receives intel of impending nuclear doom on the Little Feat-meets-T. Rex-rocking title track), and you have a collection of tunes that is more than just a mere album. Rather, Floor It!!! is a rich and righteous ride.

And while that ride took decidedly longer to complete than the four days spent on the Gent’s first record—they recorded Floor It!!! primarily at EchoLab Studios in Denton, Texas, with producer Matt Pence, who Lee describes in no uncertain terms as a “wizard”—it was still a largely organic affair. “We all have pretty good grips on what we’re supposed to do, so a lot of it was tracked live in the studio, with as few overdubs as possible,” Lee says. “We like to have it where everybody’s just vibing together in one room.”

Adds Creamer, “The stuff you hear on the record is pretty fresh and spontaneous. It’s not like we did a hundred takes of a song. We tend to just get a melody and follow it in a way that makes sense to us.”

That intuitive connection is hardly surprising given the fact that the bonds between the band members stretch back, in some cases, to the days before they were even Gentlemen. “For years even before we started the band, Daniel and I and a couple of the other guys all lived together in a big Brady Bunch house in Duncanville, just outside of Dallas,” Lee says. “We’d just sit around and fiddle with stuff and it always worked really well. It was never forced.”

Regarding the songwriting partnership between he and Creamer, Lee continues, “There’s never any hiccups in the process. I think it’s because we’ve had a lot of the same experiences—we’ve worked together on different sessions over the years and we know a lot of the same people, so we’re pretty fluent in our ideas and opinions.” He laughs. “Like, if we wanted to take a jab at somebody in a song without letting on, we could do it pretty easily—‘cause we’d both know right away who it is.”

“We both just like to nerd out a little bit with melodies and arrangements,” says Creamer. “We try to find something that tickles the ear a little bit and goes the extra mile, you know?”

So when it all comes down to it, what, exactly, is the Texas Gentlemen? “If somebody were to ask me that, I would say first and foremost that we’re a group of friends,” Creamer continues. “And because of that, there’s no limits on the music we create together. We like to have fun and do funky stuff and we like to rock and we like to jam. Sometimes that takes us into country music, sometimes it takes us into soul, sometimes into some progressive things. It can be all kinds of places. There’s no constraints on what we do.”

As for how Lee would describe the Gents? “I think it was said best by a guy on BBC radio,” he responds. “We were on tour in Europe, and we’re driving to the airport and the DJ comes on and he clears his throat and he goes, ‘Okay, up next we have a Texas boo-gie band called the Texas Gentlemen.’ So that’s what I like to say: we’re a Texas boogie band!

“But really,” Lee continues, “this band is less about a style and more just a way of life. The music that we’re playing can change at any given moment—we just kind of go with the flow. When it comes down to it, we just want to have a good ol‘ time.”

And so, dear listener, should you. And in that department the Texas Gentlemen have got you covered. Just grab a hot-off-the-presses copy of their latest record, slap it on your nearest hi-fi, drop the needle on the grooves and Floor It!!!