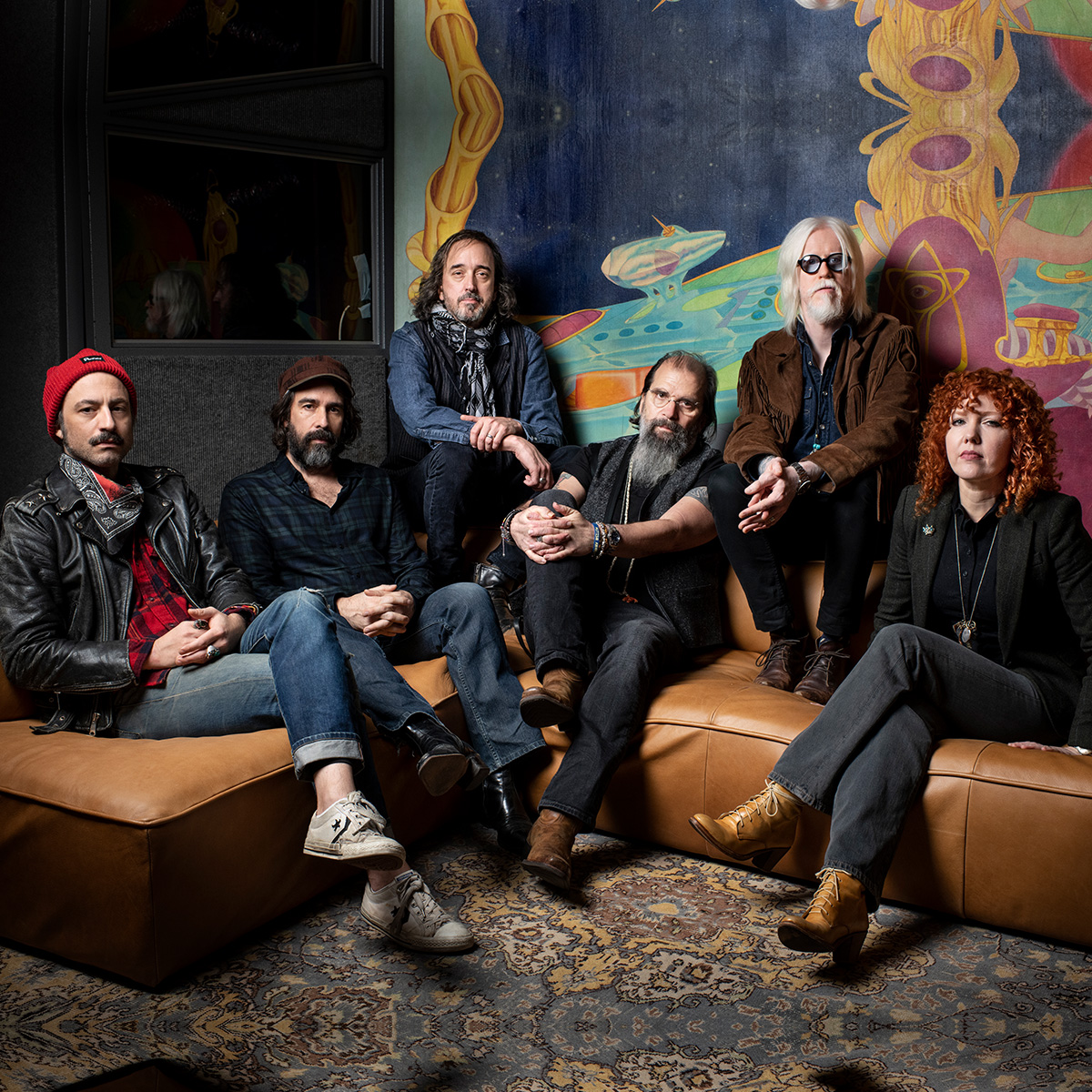 When asked about what drove him to craft his deeply evocative new album, Ghosts of West Virginia, Steve Earle says that he was interested in exploring a new approach to his songwriting. “I’ve already made the preaching-to-the-choir album,” he says, specifically alluding to his 2004 album, The Revolution Starts Now. As anyone as politically attuned as Earle understands, there are times when the faithful need music that will raise their spirits and toughen their resolve. But he came to believe that our times might also benefit from something that addresses a different audience, songs written from a point of view that he is particularly capable of rendering.

“I thought that, given the way things are now, it was maybe my responsibility to make a record that spoke to and for people who didn’t vote the way that I did,” he says. “One of the dangers that we’re in is if people like me keep thinking that everybody who voted for Trump is a racist or an asshole, then we’re fucked, because it’s simply not true. So this is one move toward something that might take a generation to change. I wanted to do something where that dialogue could begin.”

Ghosts of West Virginia centers on the Upper Big Branch coal mine explosion that killed twenty-nine men in that state in 2010, making it one of the worst mining disasters in American history. Investigations revealed hundreds of safety violations, as well as attempts to cover them up. The mine’s owners agreed to pay more than $200 million in criminal liabilities, and shut the mine down.

In ten deftly drawn, roughly eloquent, powerfully conveyed sonic portraits, Earle and his long-time band the Dukes explore the historical role of coal in rural communities. More than merely a question of jobs and income, mining has provided a sense of unity and meaning, patriotic pride and purpose. As sons followed their fathers and older brothers into the mines, generational bonds were forged. “You can’t just tell these people that you’re going to shut the coal mines without also telling them what you’re going to do to take care of them, to protect their lives,” Earle explains. To be sure, Earle’s politics have not changed. He believes in sustainable energy sources and ending fossil fuels. “But that doesn’t mean a thing in West Virginia,” he says. You can’t begin communicating with people unless you understand the texture of their lives, the realities that provide significance to their days. That is the entire point of Ghosts of West Virginia.

Earle started working on the album after being approached by Jessica Blank and Erik Jensen, a playwright team that would eventually create Coal Country, a theater piece about the Upper Big Branch disaster. Earle had previously worked with them on The Exonerated, an Off-Broadway play about wrongfully imprisoned people who ultimately proved their innocence and got released. Earle describes Blank and Jensen as creating “documentary theater,” and they received a commission from the Public Theater in New York. They interviewed the surviving West Virginia miners, along with the families of the miners who died, and created monologues for their characters using those words. Working closely with Oskar Eustis, the Public’s Artistic Director, they workshopped the songs and text for nearly four years. Earle functions as “a Greek chorus with a guitar,” in his words. He is on stage the entire play and, along with his song “The Mountain,” performs seven songs from Ghosts of West Virginia. “The actors don’t relate directly with the audience,” he explains. “I do. The actors don’t realize the audience is there. I do.” The songs provide personal, historical and social context for the testimony of the play’s characters, and, heard on their own, along with the album’s three additional songs, they provide a wrenchingly emotional portrait of a world that Earle knows well. “I felt that I could do it because so many of those people own Copperhead Road — and I talk like this,” Earle says in the unreconstructed Texas drawl that has survived moves to Nashville and New York City, where he now lives.

Ghosts of West Virginia opens with “Heaven Ain’t Goin’ Nowhere,” a stark, a cappella spiritual that, in its sound and in its sense, captures the blend of faith and stoicism characteristic of mining communities. Without being explicit, “Union God and Country” nods to the deep union history of the West Virginia mines, a history that is being wiped out. “This was the most unionized place in America until the Nineties,” Earle points out. “Upper Big Branch was the first non-union mine in that area and it blew up and killed twenty-nine guys. That’s the deal.” “Devil Put the Coal in the Ground” is an expression of what Earle calls “a kind of hillbilly mindfulness” – a tough-minded recognition of the dangers of the mining life and the pride of doing such a demanding job in the face of those dangers. “The guy in that song is a miner and he’s being real about what he’s doing,” Earle says. On “John Henry Was a Steel Driving Man,” Earle, as so many have done before, takes the folkloric tale of the hammer-wielding hero and updates it for a contemporary world in which automation and union-busting have drained miners’ lives of so much of their potential and significance.

“Time Is Never On Our Side” was inspired by the four-day wait that four Upper Big Branch families endured because rescue teams found footprints in the mine that they believed might belong to miners they had not yet found. It turns out the footprints belonged to company managers who had entered the mine before the inspectors arrived, and failed to reveal that they had done so. The familial devastation wreaked by the mining disaster finds expression in “It’s About Blood,” in which, under a driving rhythm, Earle blazons the names of all the men who died in it. “If I Could See Your Face,” which closes Coal Country, is the only song that Earle does not sing. In the play, it’s sung by the actress Mary Bacon, while, on the album, that distinction goes to Eleanor Whitmore, who plays fiddle and mandolin in the Dukes. She delivers the ballad, a chronicle of memory, longing and loss, in a manner that is both feeling and plain-spoken, perfectly suited to its subject.

Despite its grim subject, “Black Lung” is rollicking and unsentimental, and it includes the verse that Earle describes as “the most important thing for me to say on this record”: “If I’d never been down in a coal mine,/I’da lived a lot longer/Hell, that ain’t a close call/But then again I’da never had anything/And half a life is better than nothin’ at all.” Those words were the last lyrics Earle wrote for the album, and they convey the reality of the lives that mining made possible for rural folk, regardless of the dangers.

“Fastest Man Alive” is a paean to Chuck Yeager, a West Virginia native who became a war hero and the first pilot to travel faster than the speed of sound. Earle treats him like a folk hero along the lines of John Henry and Davy Crockett (who, like Yeager, was a real person). Yeager’s life of risk in the sky offers a moving contrast to the miners facing danger underground, often unseen and unacknowledged. The album’s closing song, “The Mine,” was the first that Earle wrote, even though it was not included in Coal Country. It quietly gives voice to the hopes and fraternal bonds that a job in the mines once represented.

Earle and the Dukes recorded Ghosts of West Virginia at Electric Lady Studios, which Jimi Hendrix built in Greenwich Village, where Earle lives. That the album was mixed in mono lends it a sonic cohesion and punch, while losing none of the finely drawn delineation that the Dukes’ characteristically eloquent playing provides. More personally, however, the album is in mono because Earle has lost hearing in one ear and can no longer discern the separation that stereo is designed to produce. His partial deafness is not the result of exposure to loud volume that afflicts many musicians. He woke up one morning unable to hear in his right ear, and doctors have been unable to identify a cause. He’s been told a virus is likely the reason, but one doctor told him, “That’s what we say when we don’t know what the cause is.” As a result, Earle says, jokingly, “If I can’t hear the album in stereo, nobody else will either!”

The Dukes, too, suffered a major loss when, not long before the band went into the studio, bassist Kelley Looney, who had played with Earle for thirty years, passed away. Beyond the death of a longstanding partner in crime, Earle was faced with the prospect of finding someone who could share the telepathic musical communication so characteristic of the Dukes. Happily, Jeff Hill, who had previously worked with Earle and had most recently been part of the Chris Robinson Brotherhood, perfectly fit the bill. “Jeff stepped into the breach, but it was hard. It was really hard,” Earle says. Hill joined Whitmore, guitarist Chris Masterson, Ricky Jay Jackson on pedal steel, drummer Brad Pemberton and, of course, Earle on guitar and banjo. Their raw blend of country, rock and folk lifts the articulation of each song without the slightest hint of contrivance or pretension.

With Ghosts of West Virginia, Steve Earle has evoked a world as three-dimensional and dramatic as Coal Country, the play in which it found its origins, does on stage. That’s appropriate, because, as Earle says, “I came to New York to make music for theater, and it’s taken a long time. Theater is a powerful thing. It’s my favorite art form. It always has been. My ambition is to write an old-fashioned American musical. I’m a pretty good songwriter, and I just feel like I want to do that before I die.”

For now, however, there is Coal Country – and Ghosts of West Virginia. “I said I wanted to speak to people that didn’t necessarily vote the way that I did,” he says, “but that doesn’t mean we don’t have anything in common. We need to learn how to communicate with each other. My involvement in this project is my little contribution to that effort. And the way to do that – and to do it impeccably – is simply to honor those guys who died at Upper Big Branch.”

Steve Earle is one of the most acclaimed singer-songwriters of his generation, a worthy heir to Townes Van Zandt and Guy Clark, his two supreme musical mentors. Over the course of twenty studio albums, Earle has distinguished himself as a master storyteller, and his songs have been recorded by a vast array of artists, including Johnny Cash, Waylon Jennings, Joan Baez, Emmylou Harris, the Pretenders, and more. Earle’s 1986 debut album, Guitar Town, is now regarded as a classic of the Americana genre, and subsequent releases like The Revolution Starts…Now (2004), Washington Square Serenade (2007), and TOWNES (2009) all received Grammy Awards. Restlessly creative across artistic disciplines, Earle has published both a novel and a collection of short stories; produced albums for other artists; and acted in films, TV shows and on stage. He currently hosts a radio show for Sirius XM. In 2019, Earle appeared in the off-Broadway play Samara, for which he also wrote a score that The New York Times described as “exquisitely subliminal.” Each year, Earle organizes a benefit concert for the Keswell School, which his son John Henry attends and which provides educational programs for children and young adults with autism.