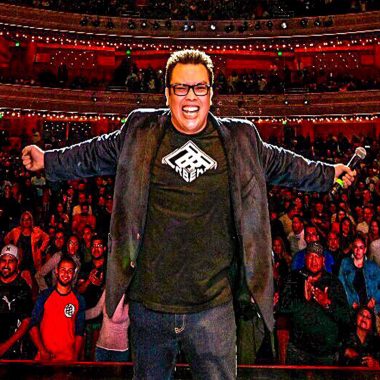 At 16 years old, he moved to Monterrey to work in bars, restaurants and canteens. He studied for 3 and a half years at the ESMYDM (Higher School of Music and Dance of Monterrey). He completed his studies and remained present in the musical environment.

Franco considers himself a clinging person, since he dreamed of having his own radio show since childhood, which he achieved with dedication under the name of Radio Squad.

He is mainly known for his comedy shows; He has performed throughout the Mexican Republic, and throughout Latin America, even starting his own “World Tour” of his tour “Por la anécdota”, having confirmed presentations in Europe and the United States, including trips to Japan and Australia. This tour led him to have sold out nights in Los Angeles, London, Paris, Barcelona, Tokyo and more.

His fame has made him the first comedian to appear at the National Auditorium and other important venues in Mexico such as the Mexico City Arena, in addition to making a small presentation in English at Staples Center along with Gabriel Iglesias, this catapulting him as the largest representative of the Stand up Comedy of Mexico and Latin America.

It has three specials within the Netflix streaming platform: “Por la anécdota”, “Comediantes del mundo” and the most recent “Bienvenido al mundo”.

He debuted as a musician at the Trovafest of 2016, he also performed with the Argentine band Los Caligaris at the music festival “Pa’l Norte” in 2017. He recorded his own musical album in collaboration with Edgar Oceransky entitled “Fe”.

He had his own television program on the Estrella TV channel called “El show de Franco Escamilla” and has also participated in episodes of Comedy Central.

Within its YouTube channel, it has a program called “La Mesa Reñoña”, which adds more than a hundred editions, made by his companions of “La Diablo Squad”, which is broadcast live every Monday at 9:30 pm (Monterrey time) through said platform. It has special editions with stars from various fields, including Gabriel Iglesias, Teo González, Óscar Burgos, Mario Castañeda, John Milton, among many others.

It has a wide programming bar through its official YouTube channel, among which “No me digas”, “El principe del barrio”, “Tirando bola”, “Yo me la se” and “Fuera del control” .

His current tour, “RPM” (2018, 2019), arrived in Hong Kong, Sydney, Melbourne, Japan, among other countries, in addition to his duties in Mexico, the United States and South America.